The Bluegrass Classic, Rocky Top, is one of the most iconic songs in modern history. With a fast, upbeat tempo that belies its sorrow-filled message, this song has become one of the most beloved bluegrass hits to ever be penned. Its storied history is one of inspired songwriting, enduring popularity, and a long-time fight song of the Tennessee Volunteers. There’s so much to this bluegrass classic!

Whether you are a Tennessee fan or not, you have to admit it is a great song.  When written, it wasn’t intended for this reason. 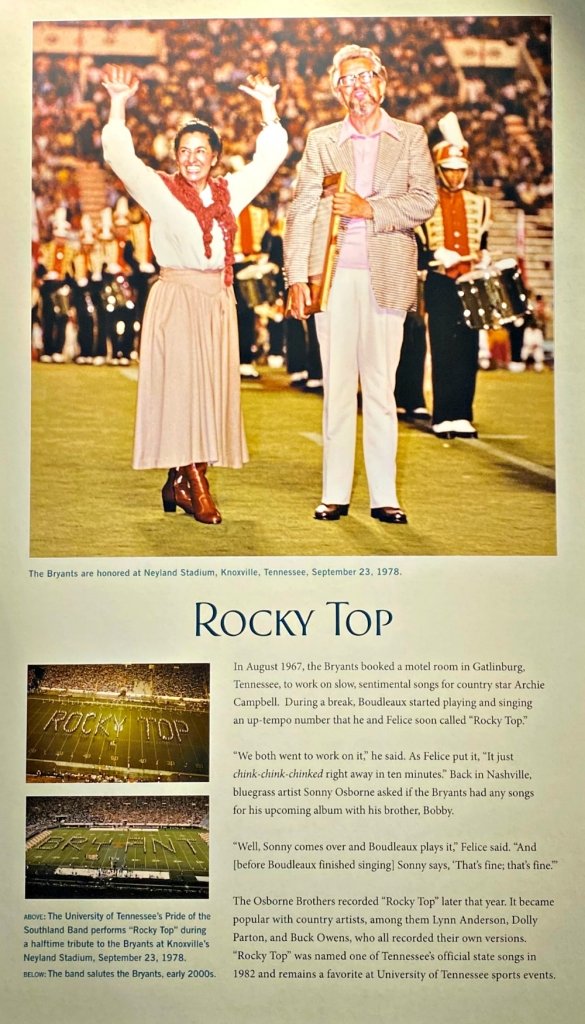 Many like me, aren’t aware the history of this song. It was not written specifically for The University of Tennessee Vols. I had heard a little history about the song, but after a recent visit to The Country Music Hall of Fame, I became intrigued a little more about the writers, the song, and The Historic Gatlinburg Inn.

A Bluegrass Classic from the Start

Rocky Top was written by husband and wife songwriting duo, Boudleaux and Felice Bryant, in 1967. In ’67, the Bryants were working on a collection of slow-tempo songs for Archie Campbell and Chet Atkins while staying at The Gatlinburg Inn in Gatlinburg, Tennessee. The couple, growing bored with the slower songs decided to write something different as a distraction, and in only 15 short minutes Rocky Top was born. 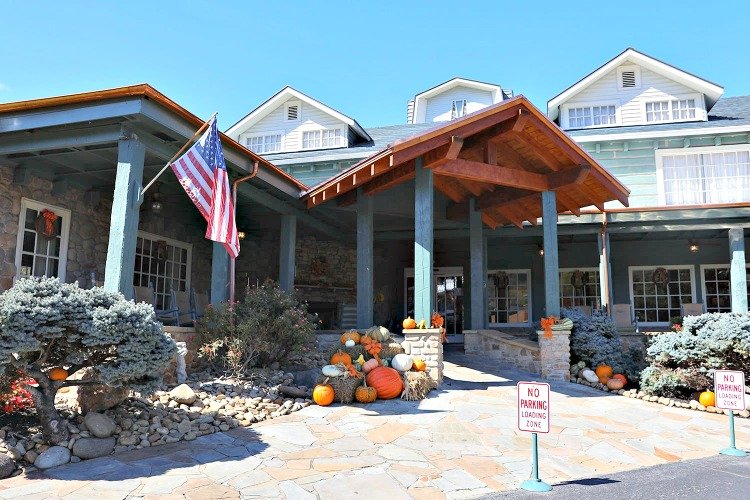 The song immediately became a regular on the Osborne Brothers’ rotation at their concerts in the late 60s, and although it was played at every concert, it didn’t become widely popular until it was recorded by Lynn Anderson in the early 70s, reaching number 17 on the Billboard Country Top 100.

In 1972, the University of Tennesee’s Pride of the Southland Band played the song for the first time for one of its drills. The arrangement was so well-received that it was played at a halftime country music show by guest saxophone soloist, Boots Randolph, at a game in late 1972. 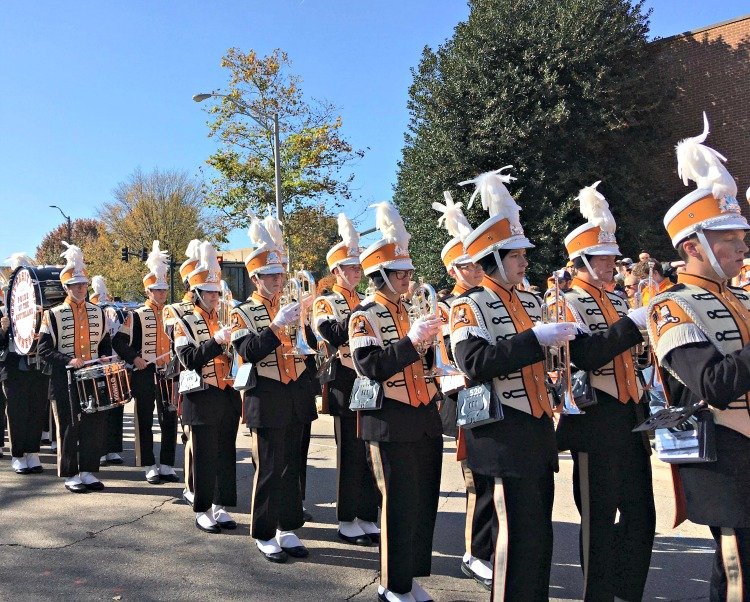 On New Year’s Eve, Randolph played the song again at the UT/LSU Astro-Bluebonnet Bowl and the audience loved it. Seeing how much the audience responded to the song, the band began playing the bluegrass classic at every game.

In 1982, Rocky Top was adopted as the fifth Tennessee state song.

The Couple Who Pinned the Bluegrass Classic

Boudleaux and Felice Bryant were a prolific songwriting team who wrote several hits for the likes of Leona Douglas, Carl Smith, the Everly Brothers, Roy Orbison, and many others. Over the course of their career, the duo earned 59 BMI country, pop, and R&B music awards. It wasn’t an easy road, though. 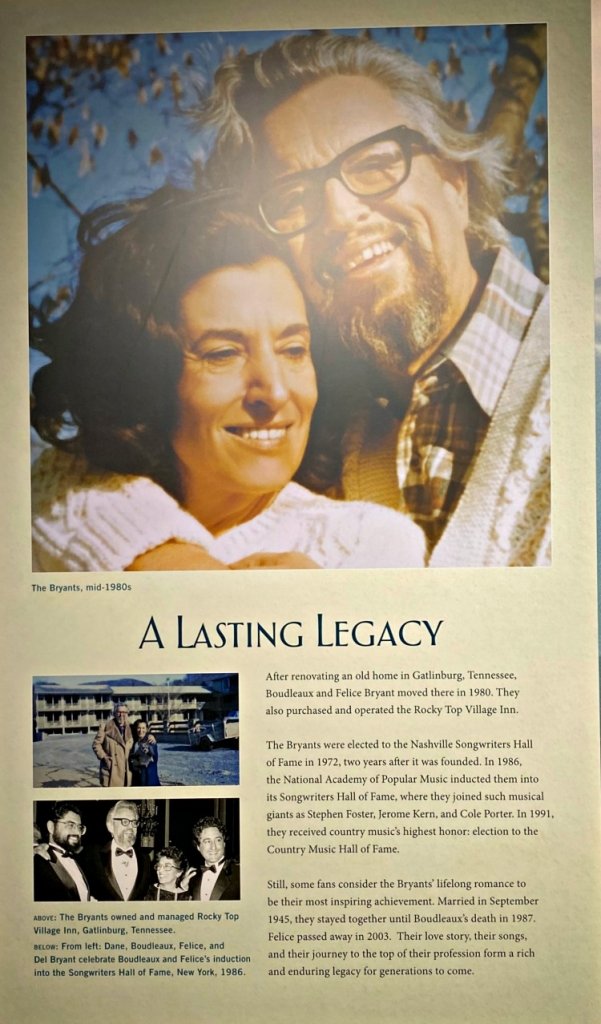 In the early years, the Bryants struggled with money, living in a mobile home, writing over 80 songs together. Though they’d later pen many hits, their early submissions were either ignored or rejected until Little Jimmy Dickens recorded Country Boy. The song reached number 7 on the country charts in 1948, which led the Bryants to a working relationship with Fred Rose at Acuff-Rose Music in Nashville.

Over the years, their songs were recorded by a variety of artists, many of them reaching the top of the charts. Eventually, the Bryants moved to a house in Hendersonville near their friends Roy Orbison and Johnny Cash. In ’78, the couple moved to Gatlinburg, Tennessee, where they often stayed at The Gatlinburg Inn where they penned Rocky Top among many others.

Although Rocky Top has a fast-paced, upbeat sound, the song is actually a bit of a dirge. The song’s lyrics talk about the loss of a simpler way of life, with “no smoggy smoke” and “no telephone bills”. From the first verse to the last, the song says goodbye to a way of life that was slower and more personal than the one the couple was living at the time.

No One Knows What Rocky Top Really Is

The Bryants never clearly explained if Rocky Top was a town, an actual mountain top, or simply the state of Tennesse itself. Some people believe that Rocky Top is the actual summit known as Rocky Top. Others contend that the song refers to East Tennessee, which is nicknamed Rocky Top. Both Boudleaux and Felice Bryant are long past, so we’ll never really know what Rocky Top truly is.

See Where the Bluegrass Classic Was Penned

The hotel room where the Bryants penned the bluegrass classic, Rocky Top, is still at The Gatlinburg Inn. You can book a stay in this little piece of music history because both the hotel and the room are still in service. Ask for room 388 simply known as The Rocky Top Room.

Rocky Top is one of the most popular bluegrass songs ever written. It’s been covered many times by many artists, and as the beloved fight song of the Vols, although not official, it’s been recognized as the most popular college fight song of all time. I don’t know anyone who doesn’t love the song, and it’s easy to see why. With touching lyrics and a musical accompaniment that is instantly recognizable, it’s a bluegrass classic.

The Gatlinburg Inn is like stepping back in time. Although many things such as heat, AC, and plumbing are updated, the decor and style feel like you are staying back in the 60s.

Many furniture pieces are original. They still have actual keys to each room. Per David Cross, one of the owners, this may change soon due to fire codes. 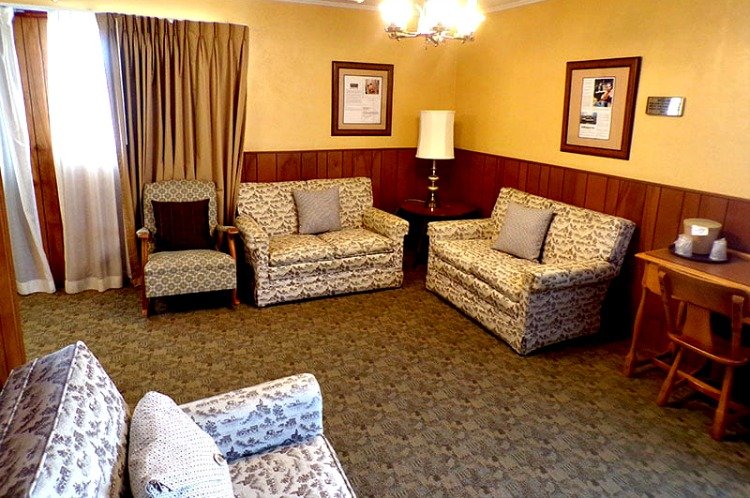 Mr. Cross, one of the fourteen owners, who are all family members from original owners, all wanted to keep it true to the original design. Read more about GATLINBURG INN HISTORY here.

As you enter, there’s a wall of fame with many well known people who have stayed there. Back in the 1960s, Gatlinburg was a getaway for many country stars out of Nashville. Just a few famous guests includes many of the Tennessee governors, Former First Lady, Lady Bird Johnson, Liberace, and Roy Acuff.

The Gatlinburg Inn is known for their breakfast bar served each morning. You will find fresh sliced tomatoes each day, but only when they are available fresh from the garden.

The Gatlinburg Inn is a perfect place to just get away and set on the front porch and enjoy nature. Or, if you want to visit the local businesses, you are close enough to just leave your car parked and walk. 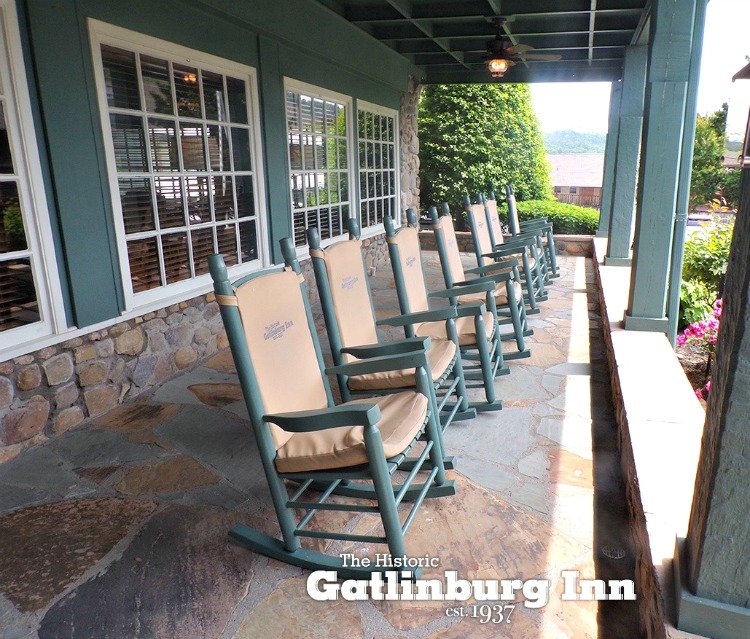 Now every time you hear Rocky Top, whether at a football game, or a favorite bar, you know the history of the song. 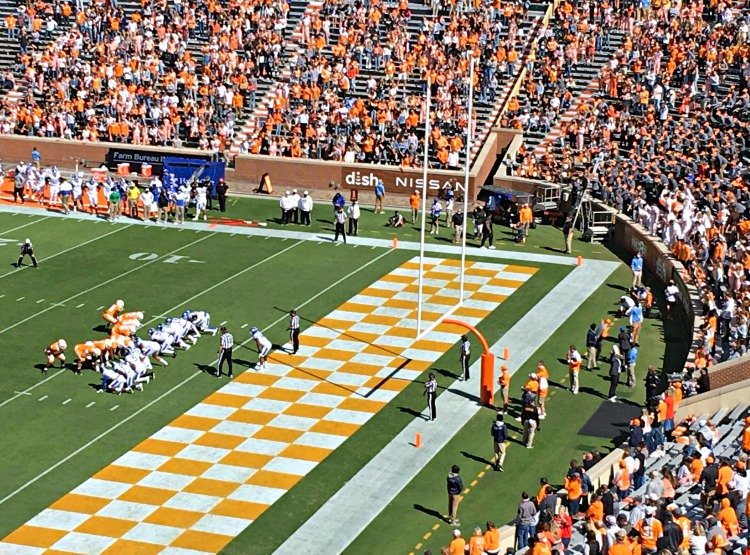 Some photos courtesy of The Gatlinburg Inn and Wanda Webb Everett.

Make sure you read about my visit to THE COUNTRY MUSIC HALL OF FAME.

Check out ATTRACTIONS THE WHOLE FAMILY WILL LOVE IN GATLINBURG

Staying at the Carnegie Hotel in Johnson City Tennessee

MyHomeandTravels.com is a participant in the Amazon Services LLC Associates Program, an affiliate advertising program designed to provide a means for sites to earn advertising fees by advertising and linking to amazon.com.
6 shares