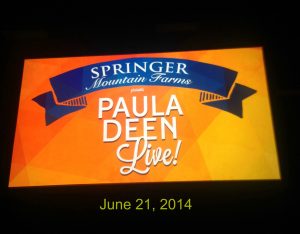 I was invited  to attend Paula Deen Live, the first of two shows held over the past weekend in Pigeon Forge, TN.  It was a very successful comeback judging from the size of the crowd and the reception shown by the audience.   Lot’s of “We Love You Paula” could be heard. 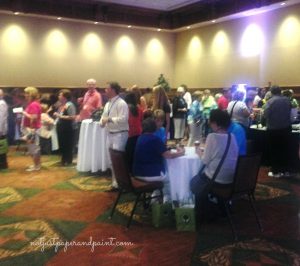 The evening began with 200 people attending a Meet & Greet with appetizers, wine, and of course sweet tea.  One of the dishes which everyone wanted seconds on was her Shore is Good Seafood Dip.

I had the pleasure of taking a Seafood Class with Paula in Savannah 10 years ago.  At the time, these were very small affairs compared to her shows and classes now.  In this class, one of the recipes featured was for this dip. Here’s the recipe for you to try at home.  Shore is Good Seafood Dip.  Other items included Fried Chicken and Chicken Pot Pie which were made with Springer Mountain Farms Chicken, a sponsor of these Live shows.  Did you know Springer Mountain Farms was the first poultry company in the world to be American Humane Certified by the American Human Association?

Michael came out and posed for pictures with the crowd and talked with everyone before Paula made her first appearance.  He is such a kind and friendly, true Southern Gentlemen, who just happens to look a bit like Santa.

During the meet & greet, we all had the opportunity of meeting Paula & Michael, getting autographs, and a professional photo.  Both truly took time to speak to each of us.  I had taken my recipe booklet and apron which I had received in my cooking class from 10 years ago.  Paula got a kick out of it and talked about how far they had come.  Theresa, a director with Paula Deen Live, remembered making those booklets.  She was kind enough to also pose for a picture with me.

All attendees received a swag bag full of goodies including a book, a magazine, cake or biscuit mix, BBQ sauce and seasoning mix.  I think biscuits will be on the menu for breakfast tomorrow. After the meet & greet, the Live Show began with a 3 piece group, Seth & The Moody Melix.  They provided a mini concert and also helped to provide a little humor during the show.  Bantering between Paula, Michael, the band, and even the audience was mixed in with food demonstrations.  Gordon Elliott, producer of her Food Network shows stood on the sideline during the whole show.  “If it wasn’t for you I wouldn’t be standing here. I thank y’all for loving me,” she said.  Through lots of laughter and tears, she was back to herself onstage in no time. Below you will find a few of the recipes they prepared on stage.

A few audience members were called up on stage to help with recipes and also for a little game of who knows Paula best.  Do you know who Paula’s celebrity crush is?  Blake Shelton.  He had appeared on one of her shows way back before he was well known. 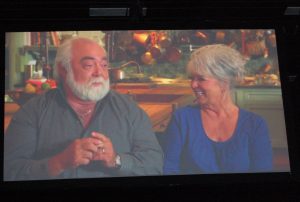 Some of the highlights included a video on how and why The Bag Lady started, how Paula & Micheal met, a tour of their Savannah home, and a clip of her new Paula Deen Network.  A few outtakes from previous shows added a lighthearted humor to the evening.

This new network, which will debut in the fall, will be available on the Iphone, Ipad, or computer.    Sign up here for the newsletter to be the first to know and receive offers about the Paula Deen Network.

For complete details and ticket information, www.pauladeen.com/schedule I hope you try these recipes as featured during the Live Show.